The rise of magicks
(Audiobook) 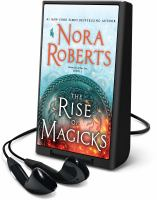 General Note
"Brilliance Audio."
General Note
"HD"
General Note
"LIGHT"
General Note
Accompanying material may vary.
General Note
Issued on Playaway, a dedicated audio media player.
General Note
One set of earphones and one AAA battery required for listening.
General Note
Previously released by Brilliance Publishing, Inc., ℗2019.
General Note
Release date supplied by publisher.
General Note
Title from the container.
Participants/Performers
Read by Julia Whelan.
Description
"After the sickness known as the Doom tore across the globe and civilization crumbled in its wake, people had no choice but to turn back to the land to survive. But in this desolate, radically altered world where magick has become commonplace, hunger is not the only danger. Fallon Swift has a home, a family, and a community, unlike so many others whose powers, or lack of powers, have made them the prey of the government or the fanatics known as Purity Warriors. Yet she cannot live in peace until she frees the hunted and the prisoners locked up in laboratories, brutalized for years on end. She is determined to save even those who have been complicit in this evil out of fear or weakness -- if, indeed, they can be saved. Strengthened by the wisdom of her mentor, Mallick, and the troubling yet stubborn bond she shares with her fellow warrior, Duncan, Fallon has already succeeded in rescuing countless shifters, elves, and ordinary humans. Now she must help them heal -- and rediscover the light and faith within themselves. For although Fallon, from the time of her birth, has been The One, she is still only one. And as she faces down an old nemesis, sets her sights on the enemy's stronghold, and pursues her destiny -- to finally restore the mystical shield that once protected them all -- she will need an army behind her."--,Provided by publisher.
System Details
Playaway Digital Audio.
Borrower Reviews
Published Reviews
Other Possible Items

Note! Citation formats are based on standards as of July 2010. Citations contain only title, author, edition, publisher, and year published. Citations should be used as a guideline and should be double checked for accuracy.
Staff View
Loading Staff View.
Powered By Aspen Discovery supported by ByWater Solutions
v. 21.06.00