The mirror & the light
(Audiobook) 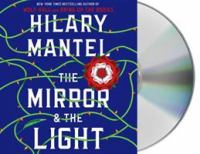 General Note
Series information from publisher's website and goodreads.com.
General Note
Title from disc label.
General Note
Compact discs.
General Note
"Includes a conversation between the author and narrator"--Container.
General Note
"A bonus PDF featuring the cast of characters and two family trees is available on disc 30"--Container.
General Note
Sequel to Wolf hall (2009) and Bring up the bodies (2012).
Participants/Performers
Read by Ben Miles.
Description
""If you cannot speak truth at a beheading, when can you speak it?" England, May 1536. Anne Boleyn is dead, decapitated in the space of a heartbeat by a hired French executioner. As her remains are bundled into oblivion, Thomas Cromwell breakfasts with the victors. The blacksmith's son from Putney emerges from the spring's bloodbath to continue his climb to power and wealth, while his formidable master, Henry VIII, settles to short-lived happiness with his third queen before Jane dies giving birth to the male heir he most craves. Cromwell is a man with only his wits to rely on; he has no great family to back him, no private army. Despite rebellion at home, traitors plotting abroad and the threat of invasion testing Henry's regime to the breaking point, Cromwell's robust imagination sees a new country in the mirror of the future. But can a nation, or a person, shed the past like a skin? Do the dead continually unbury themselves? What will you do, the Spanish ambassador asks Cromwell, when the king turns on you, as sooner or later he turns on everyone close to him?" -- Container.
Similar Series From NoveList
Similar Titles From NoveList
Similar Authors From NoveList
Borrower Reviews
Published Reviews
Reviews from GoodReads
Loading GoodReads Reviews.
Citations
APA Citation (style guide)

Note! Citation formats are based on standards as of July 2010. Citations contain only title, author, edition, publisher, and year published. Citations should be used as a guideline and should be double checked for accuracy.
Staff View
Loading Staff View.
Powered By Aspen Discovery supported by ByWater Solutions
v. 21.03.00